You Are Here: Modelling of Metallic Sealing Seats

Metallic sealing seats often take over safety-relevant functions in hydraulic applications. Despite their frequent use and seemingly simple design, it is still not possible to correctly predict the leakage that will occur as a function of the design and operating parameters of hard sealing seats. The aim of the study is to develop a scientifically founded understanding of the sealing behaviour of metallic seal seats by modelling.

Simple geometries were considered at the beginning of the modelling process. The complexity is subsequently increased until the real valve behavior could be represented. In case of macrodeformation, it was analyzed how the contact bodies deform under the influence of contact force and time and how this affects the resulting leakage flow.

The simulation model of the microdeformation includes the analysis of the material structure changes on microscopic level at the contact of metallic bodies.

The combination of the two models results in a simulation model which realistically simulates the contact mechanics of metallic, hard-sealing contacts. The model was subsequently validated by test bench results.

Development of a Test Bench for Validation of the Simulation Results 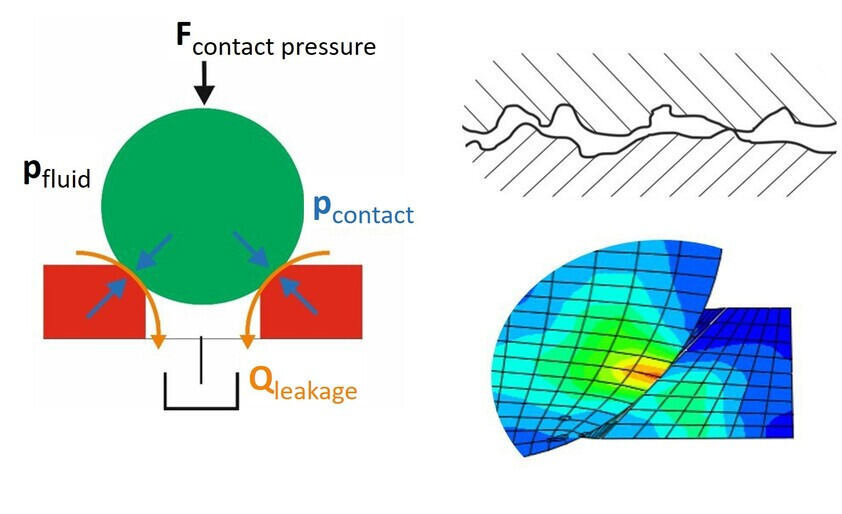 The development of the test bench was carried out under consideration of the findings that can be represented by the simulation. In order to obtain scientifically meaningful results, the selection and positioning of the measurement technology is of decisive importance. In addition, the positioning of the sealing body and the sealing seat to each other is of particular importance. The reproducible manufacturing quality of the sealing bodies should also not be neglected. A spherical shape and a sealing seat with a tapered bore were selected as sealing elements.

Based on the contact mechanics of Persson et al. a simulation model could be developed which predicts the leakage based on the geometry of the valve as well as measurements of the surfaces. First, the contact pressure and the contact surface are calculated, taking roughness and material behavior into account. Subsequently, the simulation of the leakage takes place.

The simulation model developed in this way was successfully validated using the test rig on real poppet valves. The validation of the model also simultaneously demonstrated the applicability of Persson's theory, which was originally developed for elastomers, for metallic surfaces.

The research project is funded by the German Research Foundation. It is a joint project that ifas is conducting together with the Peter Grünberg Institute (PGI) of Forschungszentrum Jülich.