You Are Here: PUB - Development of a Prototype Valve for a Hydro-mechanical Braking-torque Control used on Railway Disc Brakes (EN) 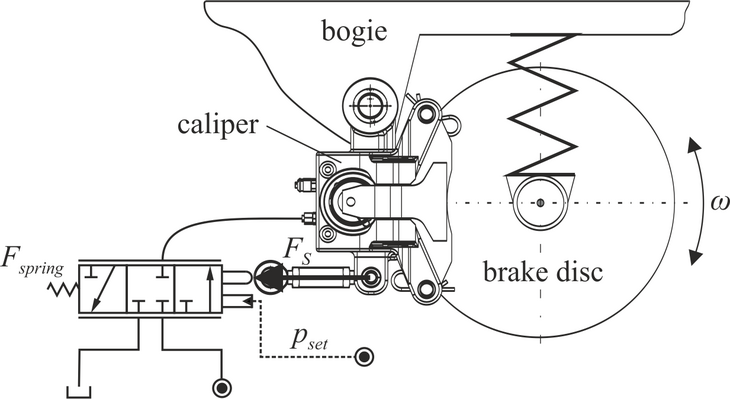 A paper on “Development of a Prototype Valve for a Hydro-mechanical Braking-torque Control used on Railway Disc Brakes” was published at the conference ICHP 2018 in Prag.

Novel brake with the control unit

Hydraulic disc brakes are one of the most common brake types used in vehicles. In low-floor railway vehicles, they are used due to their compact design, high power density and good dynamic performance. The friction between the brake disc and the brake pads is subjected to various disturbances, which influence the generated braking torque of disc brakes. Usually, there is no closed-loop control of the generated braking torque and few countermeasures are taken to avoid the disturbances. Consequently, the braking effect is affected by those disturbances, which may lead to a degradation of the braking performance.

A closed-loop control of the braking torque of disc brakes is subject of an ongoing research project conducted at the Institute for Fluid Power Drives and Systems at RWTH Aachen University. Within the project, a novel hydraulic disc brake system with closed-loop control of the braking torque is under development. During the braking process, the torque on the caliper acts on a supporting rod. It has been found that the resulting supporting force is proportional to the braking torque. Thus, this force is utilized as a torque feedback for a hydro-mechanical control unit. The functionality of the concept for spring-applied hydraulic brakes is described. The braking force of those brakes is generated by a pre-stressed spring and the brake is opened by a cylinder. Therefore, spring-applied brakes are inherently fail-safe and often preferred to active brakes.

In the scope of this paper, a simulation model of a spring-applied disc brake is introduced and the behavior of the conventional spring-applied disc brake is investigated. Based on those results, necessary requirements on the control unit are deduced and a suitable prototype for the investigation on a test rig is developed. Finally, the behavior of the control unit is analyzed using the simulation model.