You Are Here: Tribology & Fluids

The “Tribology & Fluids” research group focuses on the research of pressure fluids and the holistic understanding of tribological systems in hydraulic and pneumatic applications.

The aim of the tribological investigations is to ensure the transferability of the research results to real systems and to enable an application-oriented optimization of existing tribological systems. This is going through

ifas has extensive experience and expertise in the development and operation of highly specialized, customized test benches. Among other things, unique test benches for the determination of pressure-dependent fluid properties (up to 8000 bar), friction forces in sealing systems at relative speeds of up to 10 m / s, as well as leakage and entrainment test rigs of rod sealing systems were developed and operated.

In addition, various tribometers are in operation for investigating abstracted tribological contacts under the influence of different lubrication conditions and material pairings. Furthermore, the research group has an oil laboratory with a variety of standardized test equipment such as Capillary viscometers, HFRR and SLBOCLE. The research projects help to improve the physical and / or empirical understanding of tribological contacts and systems. 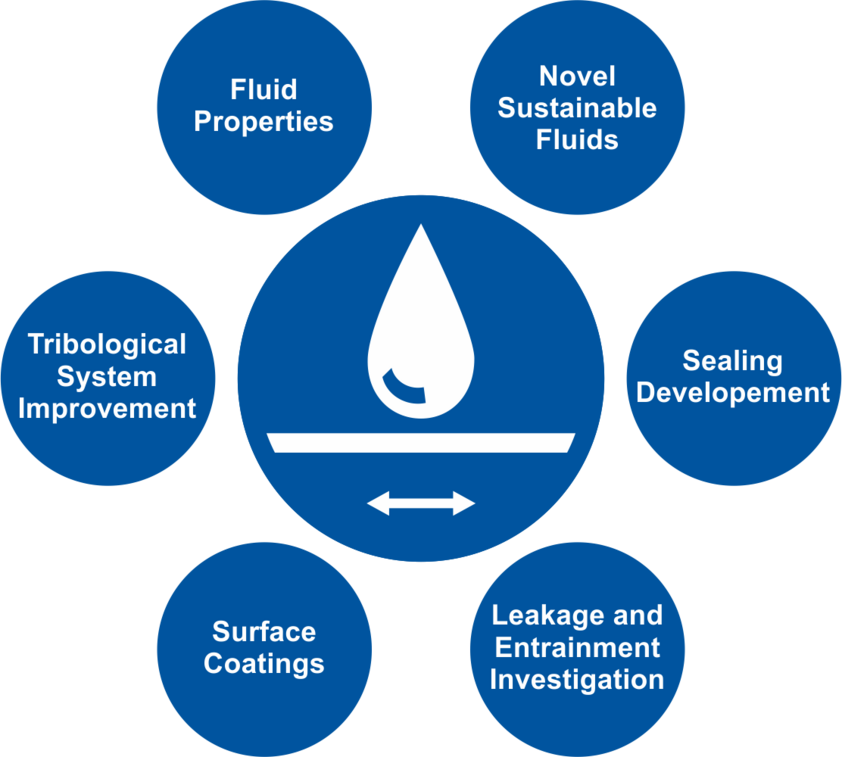 Hydraulic systems are subject to increasingly stringent environmental regulations due to the poor biocompatibility of the fluids used. Therefore, the trend towards the use of environmentally friendly fluids is continuing or increasing. However, these bring disadvantageous properties, such as a short life time or high costs. A liquid that is indefinitely available in good quality almost everywhere is water. However, it can not be used in its purest form and must be modified for use in hydraulics and optimized for compatibility with the components used.

In addition to environmental regulations, safety standards are becoming stricter. In fluid power drives, these regulations are met very easily by the use of special valves, which is a great advantage compared to other drive technologies. However, the performance of such valves is not fully understood. The goal is to develop a physically based model of the sealing mechanism of the valves and to translate these findings into an easy-to-use software tool. This increases the design reliability of such valves and at the same time reduces the development time through better predictability.

In modern fluid power drives increasingly ash and zinc-free fluids are used with very low electrical conductivity. As a result, electrostatic charges in the liquid are no longer conductively dissipated, but spontaneous discharges, in particular in the filter, occur. At the ifas the influences on the charging are examined. In addition, cavitation phenomena in hydraulics are very critical. Foreign fluids, such as air or water, form bubbles that can cause damage and undesirable system behavior. The bubbling potential of liquids is investigated for hydraulic fluids.

Tailor Made Fuels from Biomass (TMFB)

As part of the Cluster of Excellence "Tailor-Made Fuels from Biomass", diesel fuels based on biomass are being developed. A central research question in this context is the injectability of these fuels in the combustion chamber. The currently unknown fluid properties under pressure conditions such as in the rail are crucial here. To gain further insights, high-pressure test benches are developed and operated at the ifas.