Seals are an indispensable component in hydraulics. They close off volumes and thus enable pressure to build up and prevent leakage. Both the leakage, friction and wear behavior are highly non-linear and currently poorly understood. For this reason, a theoretically founded validated model of translational seals has been developed within the Reinhart Koselleck project "Transient friction and leakage behavior of translational hydraulic seals".

Seals are an indispensable component in hydraulics. They close off volumes and thus enable pressure to build up and prevent leakage. Both the leakage, friction and wear behavior are highly non-linear and currently poorly understood. The classical method of investigating sealing behaviour is strongly experimentally supported. However, a profound understanding can only be gained from a close interlocking of numerical analytical and experimental considerations. Therefore, a theoretically founded validated model of translational seals has been developed within the Reinhart Koselleck project "Transient friction and leakage behavior of translational hydraulic seals". 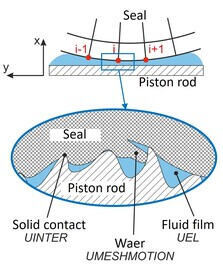 The description of the solid contact (normal contact and frictional force) is based on the model developed at PGI. For example, based on the measured spectral power density C of a surface and the known material data of the elastomer, a relationship between gap height h and contact pressure p' can be determined. For the implementation of the physically based solid state contact model the subroutine User Interaction (UINTER)was used.

During this project, a physically motivated approach for simulating the transient behavior of translational hydraulic seals was developed. The model was successfully validated using a tribometer test rig. The model was capable of calculating the stationary and transient friction force of the seal on different surfaces and of calculating the wear geometry for a given amount of wear. In the follow-up project, the gained understanding of translational seals is transferred to other applications such as seals in pneumatic valves.

This research was carried out within a Reinhart-Koselleck project (MU 1225/36-1) of the Deutsche Forschungsgemeinschaft (DFG). We would like to thank the DFG for its financial support.