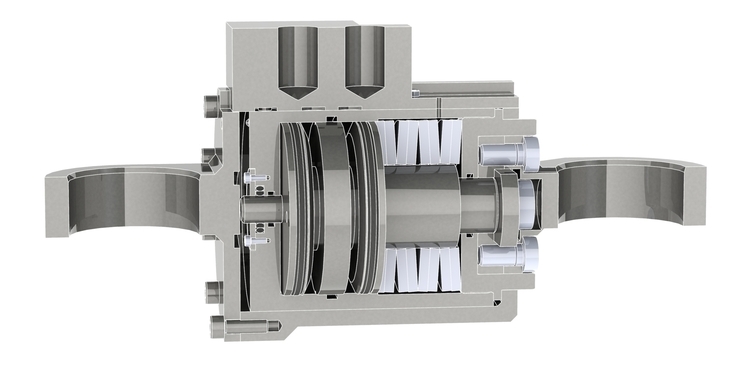 Upcoming research on the controlled brake

In the further course of the project, the developed test bench will be set up, put into operation and then the prototypes of the brakes will be tested experimentally. The results will be used to verify the built up simulation and optimize the prototypes. After functional verification, an installation in a reference vehicle is planned in order to prove the functionality under real operating conditions.

Copyright: © ifas Prototype of a mechanical-hydraulic controller with mechanical rectification and fail-safe behaviour for a passive rail vehicle brake

Prototypes of the controller unit for rail vehicle brakesder

Braking torque control was developed using the example of rail vehicle brakes. Both active and passive brake types were specifically investigated. To increase the robustness and reliability of the system, the complete implementation is chieved hydraulically-mechanically without electronic components.

Copyright: © ifas Parameter study: Responsesurface of the standardized braking torque of the uncontrolled (left) and the controlled system (right)

The design and the verification of the functionality of the prototypes was first simulated in AMEsim™. The simulation results show a significantly lower scattering of braking torques. With controlled braking, the braking torque can be kept constant over a wide range of friction coefficients. Only when the physical limits are exceeded a drop in braking torque can be detected. A significant influence on the control has to be expected from the vertical brake disc offset resulting from the vehicle suspension.

For the experimental investigation of the prototypes, a brake test bench was developed which allows realistic operation in the full performance range of the brakes. The friction conditions at the brake pads can be specifically influenced by a wetting system.

The successful implementation is made possible by the kind support of HANNING & KAHL GmbH & Co KG (H&K).

At this point we would like to express our explicit thanks to both the DFG and our application partner H&K.