You Are Here: Fluid Technology 4.0 - The valve as a soft sensor

Fluid Technology 4.0 - The valve as a soft sensor

Current efforts to integrate more functionalities into hydraulic components usually require an extensive insight into the process or the machine. This is usually realized by additional sensors.However, the additional use of sensors contrasts a high global cost pressure as well as the effort to reduce the integration effort.This project addresses exactly this discrepancy by means of cost-effective, software-based sensors.The goal of the project is to develop a methodology for volume flow estimation on direct-actuated valves with solenoids for constant pressure systems. By detailed modeling of the valve, inherent disturbances can be taken into account and thus the volume flow through the valve can be inferred from the electrical variables of the actuator as well as the armature position.

There are currently numerous efforts to integrate more functionalities into hydraulic drive components and thus to counter the offer of increasingly powerful electric drive solutions. At the same time, components are changing from detached functional elements to networked modules in higher order processes, such as I4.0 or the IoT. In the course of these processes, power and condition monitoring, smart systems and the creation of redundancies, for example, are becoming increasingly important, but require extensive insight into the process or the machine. This is usually realised through measurement data using additional sensors.
However, this development is contrasted by the high global competitive and cost pressure as well as the increasing system complexity and integration effort, so that increased functionality and thus increasing costs must be carefully weighed.
The measurement concept of a soft volume flow sensor presented here addresses precisely this discrepancy by means of cost-effective software-based sensors that do not require any additional integration effort.
The dependence between flow force and volume flow serves as the basis of this new method for measuring the volume flow. The valve solenoid serves as a force sensor for recording the flow force.

The majority of fluidic valves are actuated by pot magnets, which generate a magnetic force when a current is applied and thus move the slide or open/close the control edges. The fluid then flowing through the valve in turn generates a flow force acting on the spool, which depends in particular on the spool position and the volume flow. For most industrially relevant valves, this relationship is unambiguous, so that if the slide position and flow force are known, the volume flow can be inferred.
The flow force acting in the closing direction in turn counteracts the electromagnet, which holds the slide in a predetermined position. This results in a balance of forces consisting of magnetic force, flow force, frictional force and, if applicable, a spring force. If the frictional and spring forces are known, the flow force can be deduced from the magnetic force. The last step in the measurement chain is the estimation of the magnetic force from the state variables of the magnet (current, voltage and position). 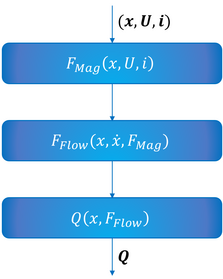 Depending on the valve configuration, the variables required to determine the volume flow (current, voltage, slider position) are already available in the control electronics. Thus, additional functionality can be generated cost-effectively at this point by expanding the control software.

An approach to volume flow determination in valves that is currently already frequently used is differential pressure measurement. Here, the pressure is measured upstream and downstream of the valve. With a known valve characteristic and spool position, the volume flow through the valve can be determined. The disadvantage of this approach is the additional implementation of two pressure sensors, which leads to increased system complexity and additional costs. The difference to classic volume flow sensors lies in a significant reduction of the necessary installation space, the integration and, above all, the resulting costs.

With the proposed new method, the user can thus be provided with an inexpensive, wear-free and, above all, easy-to-integrate sensor of a decisive measured variable in order to be able to implement new I4.0 or automation concepts cost-efficiently. On the manufacturer side, the software-related economies of scale and the knowledge protection possible through software solutions can be fully exploited after one-time implementation.
In the proposed variant, the measurement concept does not aim to completely substitute the performance of a classic, high-priced volume flow sensor. Rather, this measuring concept with a sufficiently small measuring error for many applications is intended to create a cost-effective possibility to obtain process information that was previously inaccessible to the user in a simple way directly from the valve.

The project is funded by the Forschungskuratorium Maschinenbau e.V. via the AiF.