Compressed air generation is responsible for about 10% of industrial electricity consumption in the European Union. A significant part is used for factory automation by means of pneumatic (linear) drives. The aim of this project is to investigate a novel system architecture for the control of pneumatic linear actuators, which has the potential to achieve a good controllability of the dynamic behavior with a higher efficiency than the state of the art.

Up to now, downstream throttling has primarily been used to adjust the cylinder speed of pneumatic actuators. The speed is adjusted by building up a pressure in the counteracting cylinder chamber. In general, the high differential pressure at the exhaust air throttle and the associated supercritical flow result in a load-independent movement of the cylinder. However, due to the adjustment of the velocity by the pressure build-up opposing it, the movement takes place with low efficiency. As a result, the cylinder always consumes the maximum amount of compressed air, regardless of the applied load.

Description of the developed concepts

While the downstream throttles in the new system directly set the cylinder speed independently of the load, as in today's systems, the counteracting pressure is used to set the upstream throttle. This is important to ensure that the pressure gradient across the exhaust throttle is just sufficient for supercritical flow. The result is a load-adaptive self-regulating component for speed adjustment of pneumatic drives with significantly increased efficiency compared to the classic exhaust air throttle. 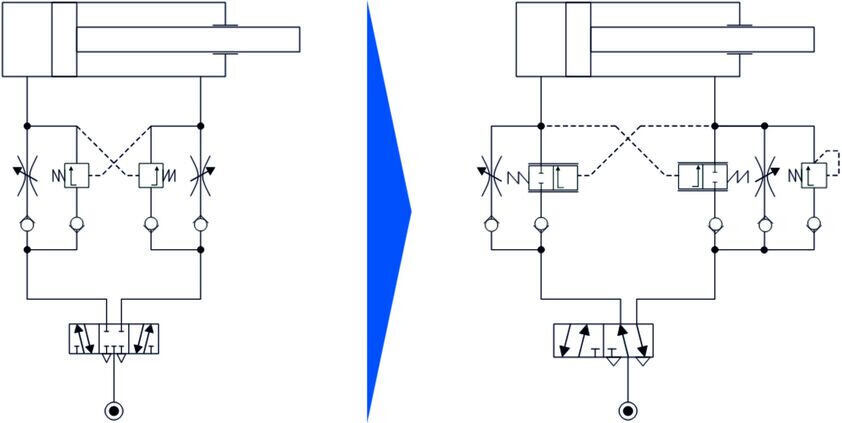 However, this design alternative has an additional requirement from a control point of view, namely that the directional control valve should quickly return to neutral position when the cylinder reaches the end of its stroke. This counteracts the effect of the upstream throttle opening fully when the cylinder suddenly stops, so that the corresponding cylinder chamber remains in the partially filled state. This additional complexity due to sensors and a more complex valve can be circumvented by an optimized version. Here, a direct fluid-mechanical implementation of the aforementioned shut-off function is achieved by means of a sophisticated circuit.

The function optimization is based on pneumatic detection of the piston reaching the end of its stroke. This causes a sudden pressure drop in the exhaust throttled chamber, which acts as a pilot for the upstream throttling valve. By means of an optimized nonlinear flow characteristic of the throttling valve, the necessary shut-off of the supply pressure at this position can be achieved directly by the throttling valve itself. This means that the previously required electronic implementation of the function in the machine control system, which requires electronic detection of the end position and rapid switchover of the 5/3-way valve to the center position, can be avoided.

First, the control stability and dynamic behavior of the previously explained concepts are optimized. For this purpose, a simulative investigation is carried out on a wide range of parameters. The goal is to show the application limits of the system by means of a robustness analysis and to work out a design guideline.

The testing of the system and the validation of the simulation results will be done by means of a prototype, which will be realized with the help of the design guideline. The prototype will be tested experimentally in a test rig which allows both static and dynamic loading of the drive. In addition to the functional and stability verification of the system under different conditions, the achievable savings potential will also be validated. In order to support a successful transfer of possible findings from the project, a function-integrated design draft will be elaborated. Finally, a cost estimate of the optimized design and a comparison of the costs with the potential compressed air savings will be made. 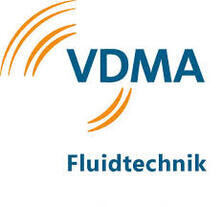