Press-hardened components are increasingly being used to reduce weight, but these require complex process design. For the necessary material characterisation of annealed sheet materials, no test rigs have currently been developed for multiaxial loading of specimens and measurement under these conditions is not yet possible, so that extrapolated material data must be used. The aim of the project is to develop a digital-pneumatic high-pressure system that allows controlled material forming and thus enables the measurement of visco-elastic material behaviour.

Development of a test rig for forming annealing metal samples

Press hardening enables the automotive industry to manufacture high-strength components with comparatively complex geometries. Crash-relevant components in particular are often press-hardened. Forming simulations can be used to design press hardening processes quickly and cost-effectively if accurate material data are available. Therefore, a bulk test is being developed within the framework of the project, which enables material testing under the conditions of press hardening. In the bulk test, a sheet metal sample is clamped between two round dies and one side is then subjected to pressure. Under the load, a bulge forms, the bulge shown in Figure 1, which is rotationally symmetrical. Due to the geometric conditions, the flow stress at the top of the bulge can be calculated by means of a membrane equation. The forming process must be as contactless as possible to avoid falsification of the results due to friction in the contact. 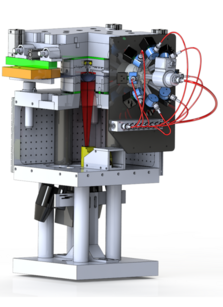 The test stand shown in Figure 2 allows sheet metal to be formed at temperatures of 1000 °C without contact. Nitrogen is used as the pressure medium. The use of classical media such as water or oil is excluded due to the high temperatures. The sheet temperature can be varied and controlled before and during the forming process. A cooling device is integrated into the tool, which directs compressed air onto the sheet. A resistance heater allows the sheet metal to be heated up.

Development of a digital-pneumatic drive system

So-called digital hydraulics, which strives to transfer principles proven in electrical engineering to fluid technology, has received increasing attention in the last two decades. This discipline primarily attempts to reduce the principle-related losses of resistance control, for example, by replacing continuous actuators with binary switching actuators. This also breaks up the concept of component series that is widespread in industry, since virtually any actuator of any size can be approximated, provided the actuators have a sufficiently small resolving power. An often neglected aspect is that it also becomes possible to provide actuators for applications that are currently not available on the market. For fluid technology applications, for example, where the use of oil as a medium is excluded, only very limited components are available. In particular, proportional actuators with a high bandwidth are hardly or not at all available. In principle, this shortcoming can be circumvented by applying the principles of digital hydraulics, but it requires a departure from the control concepts widely known in fluid technology. The pneumatic system of the bulk test requires system pressures of up to 300 bar. Since sufficiently fast proportional valves are not available on the market, a cascade of switching valves with binary staggered conductance values was developed, which is controlled using the pulse code modulation method.

In addition to the digital-pneumatic approach described above, a highly dynamic gas valve for pressure control is being developed in parallel. Different approaches are being pursued here. On the one hand, a fast switching valve is being converted for quasi-proportional operation. Here, the valve armature is moved in a targeted manner by means of electrical control, position observers and flow controllers in order to influence the mass flow in the desired way. On the other hand, a directly actuated proportional valve based on a commercially available valve solenoid and the necessary actuation and control system are being developed. The concepts have in common that they can be transferred to industrial production and application with little effort.

The pneumatic system makes it possible to regulate the speed of the forming process until the process reaches critical strain and becomes unstable. The system is not limited to the application for the Bulge Test and can also be used as a control system with a resolved control edge for classic fluid technology applications such as lifting a cylinder.

The cooperation project was funded by the German Federal Ministry for Economic Affairs and Energy via the AiF as part of the Central Innovation Programme for SMEs (ZIM) programme.