You Are Here: Flow Cavitative Erosion for Component Cleaning

In many casting processes, unwanted material deposits - so-called blinds - are created by mould cavities. Up to now, these have had to be removed manually in subsequent process steps and thus necessitate increased production effort of the cast components and thus higher costs. By means of flow-cavitative component cleaning, fully automatic deburring and cleaning is to be made possible, whereby the simulation of these effects and subsequent validation was the focus of this research project.

Despite increasing computer capacities and speeds, cleaning and deburring simulations have hardly been realized so far. In particular, the interaction between fluid and solid, the so-called fluid-structure interaction, represents a great challenge in simulation technology. Within the context of this project, a further step was taken into the simulative description of a new type of cleaning process, in which the targeted generation of cavitation in the vicinity of undesired structures causes material removal and thus a locally limited cleaning effect. In practice, the successful simulation can be used, for example, to precisely define tolerances for the mould elements so that shearing of the unwanted material is just about possible. 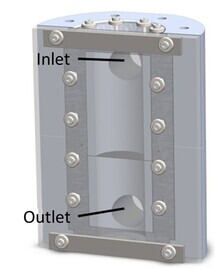 A test bench was developed at ifas to validate the simulation results. A test specimen is clamped between two matrices, which can be varied in shape and material composition. For the first tests, it is modelled from a thin aluminium foil and provided with a corresponding opening cross-section. During the test, water flows through this foil, whereby on the one hand a force is exerted on the foil by the fluid impulse, and on the other hand an acceleration of the fluid takes place due to the cross-sectional narrowing of the aperture-like sample geometry, so that the static pressure in this area decreases and leads to cavitation phenomena. During the execution of the test, a high-speed camera was used for visual documentation of the bubble formation, whereby its occurrence, size and implosion are evaluated in post-processing. The pressure before as well as after the blind can be adjusted, whereby the primary control variable is the amount of negative pressure after the demonstrator. The preload of the liquid reservoir at the input serves only to amplify the effects. 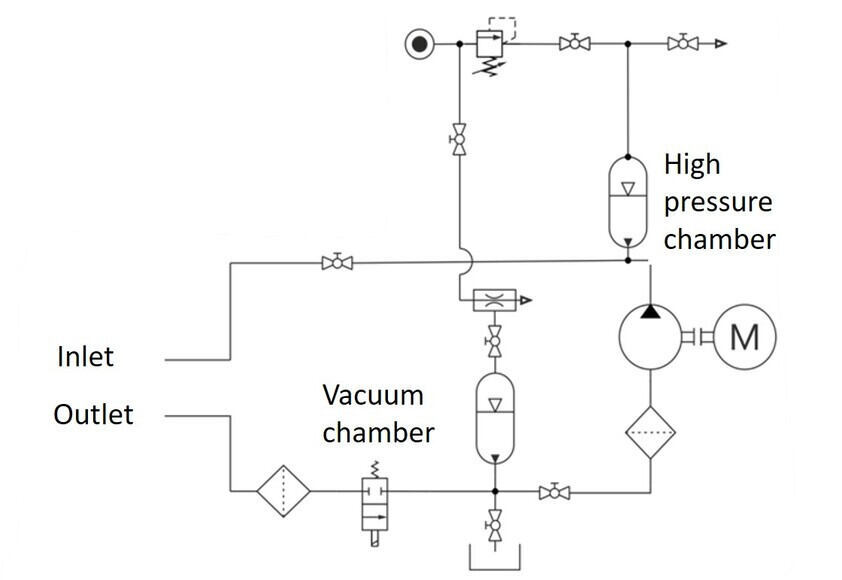 Isolation of the Effects

A central result is on the one hand the assessment of the extent of the cleaning effect and on the other hand the determination of which physical phenomena are predominant for the cleaning process. Thus, the influence of the fluid impulse was isolated by setting the correct boundary conditions and thus conclusions can be drawn about the extent of cavitation erosion. Finally, the test rig served to optimize the cleaning process under technical and economic aspects.

This research project was supported by the Federal Ministry for Economic Affairs and Climate Action within the context of the Zentralen Innovationsprogramms Mittelstand (ZIM).