You Are Here: Characteristics coupling

Simulative pressure vibration analysis is a proven tool for determining the resonant frequencies in hydraulic piping systems. In practical application today, however, there are still significant deviations between simulation and real system with low operating pressures.
The aim of the project is the development of a numerical method for a more precise consideration of the undissolved gas contained in the pressure medium when calculating the pressure wave propagation velocity in fluid-technical line systems.
In particular, the dynamics of the bubbles dissolved in the fluid are to be taken into account, which, depending on their size, distribution and excitation, have a decisive influence on the compressibility of the mixture.

Influence of Undissolved Air on the System Dynamics

The exact knowledge of the resonance frequencies of a fluid-technical pipe system is of decisive importance for both the technical functioning and the fatigue strength of fluid-technical systems. In this context, simulative pressure vibration analysis is a tried and tested tool for determining the resonance frequencies in pipe systems. In the practical application of pressure vibration analysis, however, there are still significant deviations between simulation and real system in systems with operating pressures below 10 bar. At low operating pressures, the proportion of undissolved gas contained in the fluid in particular has a major influence on the mixture compressibility, which is described by the compression modulus. While the pressure-dependent change of the static compression modulus has been considered for a long time, the dynamic situation due to bubbles contained in the fluid has not been taken into account so far. For this purpose, the bubble dynamics were considered for the first time in the project by first developing the theoretical basis for describing the equivalent compression modulus. Subsequently, an adequate model was implemented and the effects inherent in the bubble dynamics were validated in a test rig developed for this purpose.

The challenges in the simulative modelling consist in the coupling of the known fundamentals on the one hand and the (highly dynamic) bubble dynamics on the other, which can be described, for example, with the help of the Rayleigh-Plesset equation - a non-linear partial differential equation of second order. The method of characteristics (MOC) has proven itself as a solution procedure, which was also applied within the framework of the project.
Thus, a more precise description of the effective compression modulus of a liquid-gas mixture could be derived. Based on the definition of the compression modulus, the behaviour of the gas phase was described with the help of the linearised Rayleigh-Plesset equation, which serves the mathematical description of the bubble dynamics. The dynamic effects could thus be taken into account by introducing a complex-valued compression modulus, which means that a change in the pressure and a corresponding change in the density of the mixture do not necessarily occur simultaneously. Including a lognormal distribution for the bubble sizes, it was shown that realistic bubble distributions have a great influence on the mixing dynamics. In addition, with the help of the four-pole theory, the effects on a pipeline could be shown. Due to the shift in the natural frequencies of the pipe and the increasing damping leading to extinction phenomena, the need for an improvement of the current calculation methods was demonstrated. Through the subsequent development of a time-domain solution and implementation of this in the DSHplus software, the effects of bubble dynamics can be taken into account in the prediction of fluid engineering systems in the future. 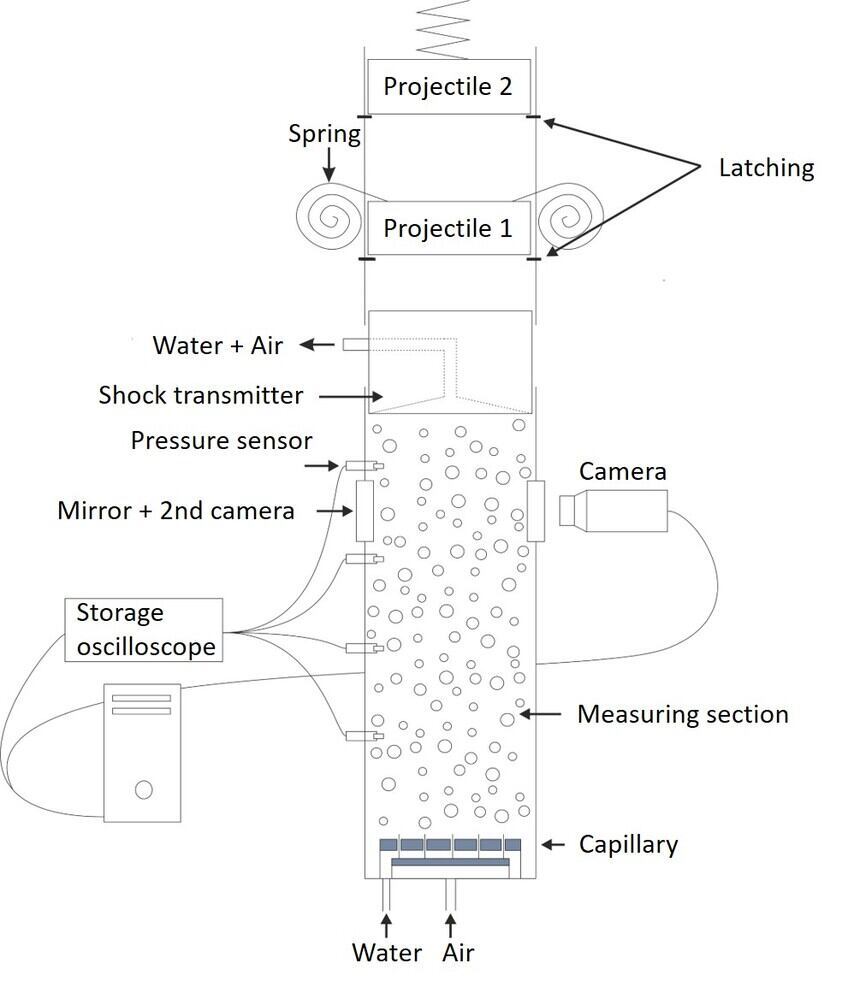 A test rig was designed and put into operation to validate the previously developed principles. With the help of this measurement setup, bubble dynamic effects could be confirmed. The bubbles were generated with the help of a capillary principle and a parallel water flow, which led to a spatially homogeneous bubble distribution. By comparing the frequency response of a two-phase and a single-phase fluid, the extinction effect induced by bubble dynamics could be demonstrated, whereby the observed effects can only be explained by the presence of bubbles.

This research project was funded by the German Federal Ministry for Economic Affairs and Climate Action (BMWK) as part of the Central Innovation Programme for SMEs (ZIM) as a cooperation project between the Institute for Fluid Power Drives and Systems (ifas) at RWTH Aachen University and FLUIDON GmbH. We would like to thank the funding body and the cooperation partner for their support.