You Are Here: PUB – Gas solubility of novel synthetic fuels and its significance for cavitation phenomena in injection nozzles

A paper on “Gas solubility of synthetic fuels” was published at the 8th International Conference “Fuel Science – From Production to Propulsion” in Aachen. 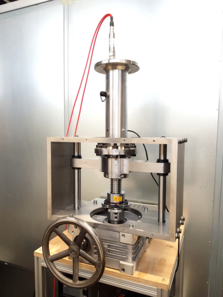 The term cavitation describes in the classical sence the formation of bubbles by falling below the vapour pressure. In Addition to this definition bubbles in a fluid can also be caused by gas, which dissolves from a liquid by falling pressure. In this case the notion of gas-cavitation is used. In classical fluidic components such as pumps and turbines or ship's propellers, cavitation is generally undesirable, as it leads to component damage and to erosion. In injection systems of combustion engines, however, cavitation phenomena like gas-cavitation can be used to influence the spray break-up in a targeted manner. In order to describe the occurrence of gas-cavitation in the injection nozzle and the interaction between gas-cavitation and spray break-up, the gaseous solution volume is of decisive importance.
As a measure of how much gas is solved in a liquid, the Bunsen coefficient can be used, which corresponds to the ratio of dissolved gas volume by standard conditions and the volume of gas-free liquid. For the determination of the gas dissolving capacity of liquids, ifas has a specially developed test rig with which the Bunsen coefficient can be measured in a range from 0 to 300 bar and -40 to + 80 °C.
In addition, the test stand offers the possibility of adding a defined gas content to liquid samples. These samples can then be used to investigate the relationship between dissolved gas and cavitation in a spray experiment.
In this contribution first the phenomenon of gas-cavitation in injection nozzles and the influence of gas-cavitation on the spray break-up will be described. This will then be used to motivate the investigation of the Bunsen coefficient of different fuels. Subsequently, the measuring principle used at ifas for determining the Bunsen coefficient will be presented. Additionally, the process of conditioning fuel samples with respect to their gas content will be described and the possibilities of investigate the influence of the Bunsen coefficient on cavitation will be discussed.